Scareware a big business, but fake virus ‘protection’ can be removed 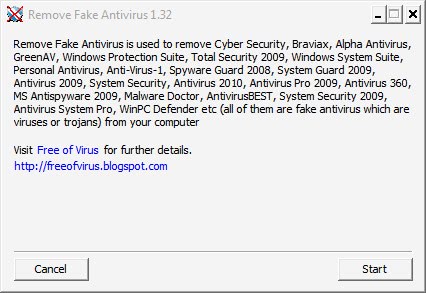 Viruses and spyware are a real concern when you spend any time on the Internet, and some people are feeding on your fears for big bucks.

But while there are quite a few legitimate anti-virus programs out there, there are more that not only do not get rid of your viruses and malware, but install more of the same on your hard drive.

Symantec, which owns Norton, says more than 40 million people have fallen victim to the “scareware” scam in the past 12 months. According to the BBC, “online criminals make millions of pounds by convincing computer users to download fake anti-virus software.” Which translates into an awful lot of dollars, not to mentioned the number of computers that are trashed by this cottage industry.

Over my years of surfing on the Internet, I’ve seen plenty of this. An ad shows up on a Web page I’m browsing, offering to scan my hard drive for free. Or flashing a message that would make even the most savvy Web surfer sweat — that viruses have been detected.

The idea is that you click on the ad and it will scan your disk, or install a virus-protection device. That’s what you think, anyway.

In reality, the scan or program is useless at best. At best.

At worst, the program or scan will install its own spyware, or its own virus, and really make hash of your hard drive — and maybe even bill your credit card in the bargain.

Welcome to the rogue security software. They either are disguised viruses, trojans or are nothing but a sales pitch, trying to push another product to the user.

Call it scareware, because it’s designed to frighten you into buying its product or download its own viruses, Trojan horses, or spyware.

Most of my Internet work is with this netbook, using Windows. But even while using Linux I’ve even seen these ads come up. I’m talking about the ads saying that viruses have been detected on my computer.

Which told me right away the claim was a bunch of horsesqueeze. For several reasons, Linux is not prone to viruses or spyware. Nor is MacIntosh, really.

OK. Time to check your computer. See what kind of virus protection you have. If it’s from this list, you’re in a bunch of trouble:

These are rogue programs, according to ghacks. And if you have one of these, you’d better get rid of it awful fast. You probably clicked on something, downloaded what you thought was virus protection, and you may have noticed your computer running like crap.

So what do you do?

I downloaded and ran it, though for me the on-the-workbench test was inconclusive. This is probably because I know the likelihood of me actually downloading and installing some of this scareware is really slim. The dialogue box showed, though, that it was removing each of these antivirus programs. My assumption was that this is the “default” dialog box. After running the program, you will be asked to reboot.

In truth, I’m a little chary of installing a virus-protection program from a non-company website (this is from a blog, how sketchy is that?) but sites like Download Squad (which gave it really lukewarm reviews), Softpedia, TechForums, and CNet (which rated it two-and-a-half stars out of five; not that great, and none of the readers reviewed it) carry links and product descriptions. Plus, I’ve never found reason to fault the information I get from ghacks.

A caveat: Here’s one of the Download Squad reviews:
Well, I ran it, and it killed my main windows service and forced a restart. When the PC came back up, I had no internet connection. Warnings should be posted.

With that in mind, I checked things out when I rebooted. The Windows security service flashed a warning saying I had no virus protection, but I see ClamWin had loaded itself in the system, per normal. A glitch, perhaps? The good news was that my wireless Internet ran just fine. But be careful!
Menawhile, there are several good virus-removal programs out there. Some — Norton and McAfee — are the kind you pay for, while others — AVG, ClamWin, and Avast! — are free. The for-pay ones are probably a bit better than the free ones, but any of these are good for the computer and your peace of mind. That is, if you update them every so often — there’s always some idiot thinking that if he builds a better virus, the world will beat a path to his door. These viruses seem to be coming down the pike faster and faster. A virus protection program is only as good as its updates, and it’s also useless if you don’t run it regularly.

For spyware removal programs, only two are worth downloading — AdAware by Lavasoft, and Spybot Search And Destroy. And neither one is perfect. But, unlike antivirus programs, you can have both installed and running on your computer. I highly recommend you run both, one after the other, as part of your regular security regimen. What spyware program one doesn’t catch, the other one probably will.