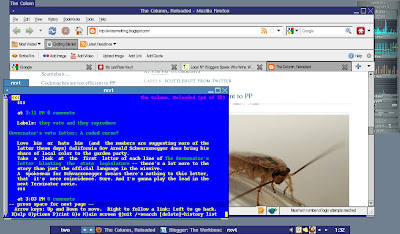 Although few had even heard of this Internet thing (then known as the “information superhighway” until the early or mid-1990s, it got its real start 40 years ago this week.

It was Oct. 29, 1969 when the first two nodes of ARPANET were interconnected between UCLA’s School of Engineering and Applied Science and SRI International (SRI) in Menlo Park, California. And unless you were one of the guys on the inside, you really didn’t know or care.

I was a bit of a late adopter. It was 1996 when I used a noisy modem to link into an Internet provider in a nearby city. My computer was an old Leading Edge XP, with an 8088 processor, Hercules graphics card, DOS 5, and 2400-bytes-per-second modem. I used Procomm to link up, and the text-only Lynx browser to surf.

This wasn’t the first time I’d used a modem. By then I was an old hand at sending text files point to point over the phone lines. I worked for a newspaper in Kingman, Arizona at the time, and generated a lot of stories from my home office in Bullhead City, 40 miles away. I’d call the publisher, Matt, and tell him to set up the computer for incoming copy, give him five minutes, then send the stuff. Soon Matt would see my text streaming across his screen, a character at a time. One of my other reporters would send me his copy from his home office, I’d edit it from home, then send it to the home office the same way. I was even able to execute commands on my home computer (the Dos-driven PC) from the MacIntosh at work, using an old-school program called Telnet.

Once I got the knack of surfing the Internet, it became a bigger part of my life. And I remember telling my parents about my experiments. Dad was already good with computers — we’d traded software for several years — but he wasn’t sure about this online thing. A curious toy, he concluded.

At the time, Netscape was the go-to browser before Internet Explorer nuked it in market share. There were rumors that you might be able to surf on the same infrastructure that your cable TV used, and much faster than dialup. Companies began building their own primitive Web sites, and ordinary people were cobbling together their own Web sites on GeoCities (which shut down a few days ago). It was a whole new world out there, the Wild Blue Yonder.

It’s been 13 years since I fired up my first Web browser (Lynx, by the way, is still available and still text-only). But a lot has changed since then. Rather than write for print, my work shows up in the ether of the Internet and many of my readers are on the other side of the world.

I’ve developed friendships with people I’d never met, and who live in places I’ve never visited. I’ve discovered musicians I’ve never heard before and downloaded their music. I’ve downloaded entire a lot of software and quite a few operating systems — and asked questions about the software online. I’ve communicated with a Linux developer in Australia and let him know how I was able to get his system to run on computers that even he wasn’t sure could be done. I’ve debated many a subject online. I’ve set up the computer to download news from several hundred sources at a time.

I’m an experimenter, and can’t leave stuff alone. Besides Netscape, I’ve used Internet Explorer, Mozilla, Seamonkey (which is what Mozilla has become), Opera, and Google Chrome. Firefox is my most-used browser now, but I notice Seamonkey is now in 2.0 and it deserves a look.

Instead of listening to a whining modem, I go straight wireless. I have about a half-dozen places where I go to do my work — some indoors, some outside, and I’ll unpack my netbook, hit a few buttons, and talk to the world. In fact, once I left dialup I had no earthly reason to even keep a landline — a cell phone on my hip, wireless Internet close by, a second, Internet-based phone line through Google Voice, all my communications needs are met.

Even then, I’m a bit of a primitive. My cell phone merely makes calls and sends off text messages. It doesn’t browse the Web. I can send short text messages to Twitter or this blog, even an email, but my single-function LG doesn’t stack up to those iPhones or Crackberries that do everything.

When you consider the all-purpose cell phones, netbooks, laptops — and I recently read about a pen that’s really a computer — you just may see desktop computers as another dying breed. Even hard drives may become a thing of the past, what with USB thumb drives and online file storage. Some of your netbooks work with just internal flash storage and USB drives, without a hard disk in sight.

The folks at UCLA and Menlo Park had no idea at the time what they’d started.

(Screenshot: The old text-based Lynx web browser, where I made my first forays on the Internet, is still around. It’s shown here with Firefox 3.5.3.)

You tell me: Remember your first time on line? Care to share? Use the comments section for your input.