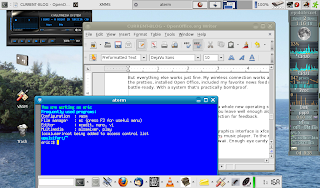 When it comes to computers, I’m always up to something. It’s probably one of my failings.

Although my netbook works very well with the mini-Linux system I recently installed, I wanted to standardize things a bit. I’ve been working toward a “final solution” that mirrors the system I have on the desktop unit.

So, I was up until around 3 a.m. one Saturday morning, installing a new operating system on the netbook. I am now using Vector Linux, a Slackware-based, rock-solid OS.

It wasn’t difficult, but then I’ve installed many a system on my computers. Really, the only part that was different was that the netbook doesn’t have a CD-ROM drive. I was using a thumb drive for the dirty work.

But it’s up, running, and all that good stuff.

Part of it is, as I mentioned, I just can’t leave stuff alone. In fact, that’s partly why I needed to make changes to the netbook anyway — in full experimental flight I toasted the Windows XP installation, corrupted some system files, and was left with a rather expensive paperweight until I broke out the tools and thumb drives.

In the interim I ran Puppy Linux, a fast little system that weighs in at less than 100 megabytes for the download. It’s one of those simple-as-it-gets systems, blistering fast and a joy to use. Really, it’s almost too much fun to be on a computer.

But Puppy Linux is a little squirrelly when it comes to downloading and installing new software. That’s something the developer is working on and while he’s making some real strides, it’s not there yet. Plus, I wanted my laptop to have the same system I have on my desktop. Some consistency is always a good thing. That’s why I opted for Vector.

OK. Linux is Linux. It’s all built around the same kernel, the same X windowing system, the same basic command-line programs you never see. Over the years the gap between the graphics-happy Windows and stodgy command-line Linux has closed, but the solid UNIX base remains. Plus, Linux is free, and tailor-made for those of us who keep experimenting and breaking things.

Vector Linux is based on Slackware, which is probably the most stable, most Unix-like of the Linux versions. I’ve followed its development for several years, and it was the version I’ve stayed with the longest. I’m using version 6.0 on the netbook, the same as on my desktop. In fact, it all came from the same download.

See, that’s one of the things about Linux. The licensing is different. You can take a download and set up as many computers as you want with it, and there’s no Bill Gates around to tell you you’re a pirate. In fact, this share-the-love practice is encouraged. I can burn as many CDs of the system as I want, give them away, sell them for a few bucks, as long as the GPL license (which they call a “copyleft”) is intact.

Again, installing is a little problematic on the netbook because there’s no CD-ROM drive. The best workaround is by using Unetbootin with a thumb drive. I put Unetbootin and the Vector Linux .iso file (which is what you get when you download) onto the drive, then used a Windows computer (had to go to the library for that) to install Vector on the drive so it will boot up. Then clear up some room on the netbook hard drive, use gparted to create a partition for Vector, and reboot with the thumb drive. Follow the prompts on the screen (on my Acer, I hit F12 for boot options), and install Vector on the new partition, a process which sounds dangerous but it’s a simple matter of following the prompts. Then put Vector on the GRUB boot loader (a simple cut-paste in a text file), reboot, and I’m running my new system.

OK. That’s the simplistic version, and I know I lost many of y’all here. Let’s just say I’ve done this a few times. Don’t be surprised if I eventually put together something more detailed, something you can download.

The big zillion-dollar question: Did I lose my work files from the old Windows system? No. They’re all there, and I can open and edit every one of them. What’s even better, I have an emulation program called WINE that will run most of the Windows programs. In fact, the Windows installation is untouched. Should I rebuild my broken system files and get XP to work, then I have a choice of which system to start when I turn the computer on.

A couple of things still need work. At first Vector didn’t recognize my onboard condenser microphone, ruling out recording. Strangely enough, though, I downloaded my favorite sound-editing software (Audacity) through Vector’s repositories, and the mic works well with that. I kind of wish I knew why it would suddenly work, but I’m not going to complain. It took a bit of experimenting to get the webcam going, though it’s not something I expect to use. So at least these issues are resolved.

I’m still looking for software that would put the laptop in hibernate mode when I close the lid. So far I’m not having much luck. The computer continues to run and the screen saver kicks on, so there’s still some battery drain. Unless I find a handy program I can plug in, I may have to recompile the kernel. Now that’s getting into territory that’s way advanced for me.

But everything else works just fine. My wireless connection works as it did before. I added some of the pretties, installed Open Office, included my favorite news feed reader, and the netbook is battle-ready. With a system that’s practically bombproof.

You tell me: Does the thought of installing a whole new operating system scare you? Do you break a lot of things while experimenting, or do you leave well enough alone? Any suggestions for my hibernation problem? Use the comments section for feedback.

Vector Linux running on the netbook. The graphics interface is xfce4. Programs visible are Open Office, and xmms music player. Oh, if you insist, that’s a command shell in the foreground, ’cause it IS Linux. I actually use mine. To the right is the gkrellm system monitor. I shot the background photo in Hawaii. Enough eye candy for you?

This entry was posted in How I dunnit and tagged Linux, netbooks, opinion. Bookmark the permalink.