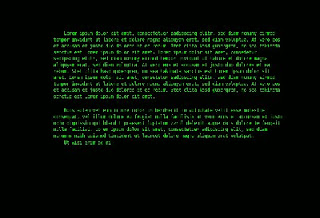 Maybe it’s a longing for a simpler time, or the realization that your computer is loaded with distractions, but lately I’ve been seeing lot of text-editing programs designed to narrow your focus.

Multitasking is out now. Welcome to the wonderful world of single-tasking.

I’ve been reading about the Darkroom program for Windows, and Writeroom for the Mac. Then there’s WriteMonkey and PyRoom, two other programs that do absolutely nothing but give you a background to type your words on. Almost nothing to play with on any of these programs.

The big question here is, what fun is that? It’s not like you can adjust your margins, change fonts, or add fancy graphics here. Your screen looks absolutely barren; even the desktop icons and Freecell game are blanked out.

I use PyRoom (which is pictured here), a text tool that shows you nothing but a green box on a black screen. My text shows up in green in that box. No formatting, no toolbars, no dancing paper clips — just the text in a box.

When I wrote for the Fontana Herald-News, we used the old Harris typesetting system, which was ancient even in the late 1980s. PyRoom reminds me of the terminal I typed on back then. The only real difference was that there was a string of commands at the top of the screen, which were for setting the type and meant nothing to me, the writer. I was limited to eight characters for the file name (which we called a “slug” back then.

I was quite productive on these old-school screens because, well, there was nothing else to do but write. I’m easily distracted, so it’s probably a good thing I don’t have an Internet connection at home or I’d get nothing done.

Much as I’ve tried to multitask, I always do my better work when I’m going the opposite direction. That means when I write, I write. When I design the page, I design the page. Those two disciplines used to be — and still should be — kept separate. That’s why I do most of my writing on a plain-vanilla text editor instead of something like OpenOffice or Microsoft Word.

With PyRoom you can set the background to a variety of color schemes, but I stick with the default green-on-black. And I understand with WriteMonkey you can even set the sound to give you the clacking of a typewriter; how cool is that? Other than that, your commands are pretty minimal with these programs. Here’s the help file with PyRoom:

While Darkroom is a Windows program and Writeroom is ported to the MacIntosh, PyRoom has no real preference. It’s written in the Python programming language, so it should work with all operating systems. It’s also free.

I wasn’t sure I’d like using such a stark text editor, but the more I use it the more I like it. And I get a lot more done when I’m using it.